ICOs aren’t always what they seem.

Almost $100 million in cryptocurrency has been stolen by exit scammers, as ICO tokens continue to plummet in value.

Indeed, the figures suggest that ICO scams over the last two years total at least $96.8 million in value, according to data compiled by blockchain intelligence firm Diar. For context, data suggests that blockchain startups have raised over $6.3 billion from ICOs in 2018 alone.

For the record, Chinese company Shenzhen Puyin Blockchain Group is responsible for a staggering $60 million of all thefts. The company raised funds for three different ventures – ACChain, Puyin, and BioLifeChain – neither of which materialized.

Other notable mentions include Cryptokami and NVO, both of which raised respectively $12 an $8 million before seemingly abandoning work on their projects. Cryptokami’s site is now defunct, and NVO hasn’t updated its platform since March.

You can see the full theft breakdown below: 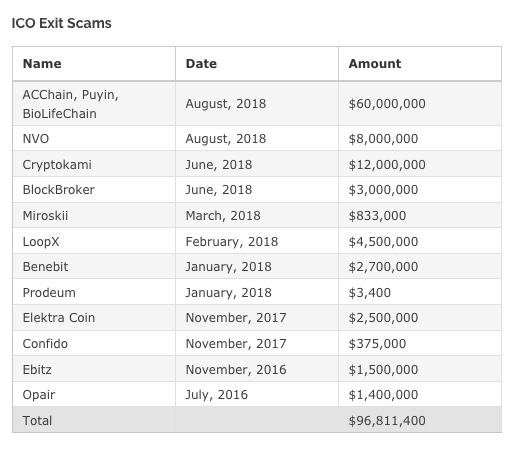 The list also features LoopX, which raised $4.5 million before making off with its investors funds, and blockchain-powered vegetable startup Prodeum, which made headlines with its cheeky exit scam message.

Exit scams continue to plague the ICO space as there is little by means of regulation to ensure the legitmacy of projects being listed, afterall there are no legal obligations in this arena to deliver a product once you have raised secured funding. It’s pretty much a digital wild west as far as the law is concerned.

Generally speaking, exit scams are easy to spot, but this clearly isn’t stopping people from being duped out of millions of dollars. Telltale signs of a dodgy blockchain ICO are plagiarised imagery, fake employee profiles, and heavily plagiarised whitepapers.

As Diar points out, the Wall Street Journal found that 19 percent of all ICOs manifested many of these red flags.

More alarmingly, and perhaps harder to spot, are the projects that are just plowing forward, slowly using up the capital raised, but still have nothing to show for it.

The Diar report crunched the numbers of the top ten ICOs whose token have been trading for at least six months, on average their price has fallen by 93 percent from the associated token’s all-time-high. It would seem that early stage speculation far distorts the true value of these tokens, where after the close of an ICO, values inevitably begin to fall.

However, these figures should be viewed with caution. As numerous Twitter users have pointed out, the numbers overly distort the overall figure of growth.

In the table below we see that prices have on average fallen 93 percent, but this is from the all time high token value after the ICO. If we consider the growth or decline in value from ICO to current price, rather than from a token’s all-time-high, the percentage changes we would observe would appear far less dramatic.

Consider TRON, even though their current value is 92 percent less than its all time high, it is still up on its ICO price – the same can be said of Status.

It’s frightening to see such large sums associated to scams where the sole purpose is raising funds, and running away into the sunset, without actually seeing through on their promises. But the story is becoming all too familiar. It’s becoming a process of scheduling an ICO, raising funds, removing the company website, siphoning off the raised capital, and going dark.

It’s clear that we all need to pay incredibly close attention when we are investigating ICOs, the age old adage, “if it sounds too good to be true, it probably is,” still holds up in our wild west world of blockchain and cryptocurrency.