The bitcoin price went into freefall this morning, despite good news for bitcoin adoption from the growing Lightning Network, as investors get cold feet ahead of the U.S. Security and Exchange Commission’s (SEC) decision expected later this month on whether to grant approval for a bitcoin exchange-traded fund (ETF) — something the SEC has previously rejected due to fears around bitcoin’s wild price swings and price manipulation.

Bitcoin fell by some $500, or 5%, in just a matter of minutes, according to CoinDesk data, and taking the bitcoin price under the psychological $7,000 mark.

The sharp fall in bitcoin price comes after unconfirmed reports from Business Insider that U.S. investment bank Goldman Sachs is ditching plans to open a desk for trading cryptocurrencies due to the murky regulatory landscape. 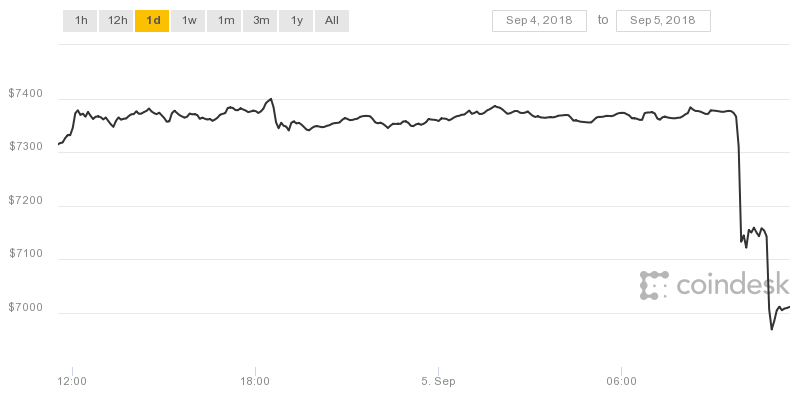 The bitcoin price took a sharp turn lower this morning, dragging most other major cryptocurrencies with it.

Goldman has moved plans to open a desk for trading cryptocurrencies further down a list of priorities for how it can participate in cryptocurrency markets, according to people familiar with the matter.

In response, the bank released a statement: “We have not reached a conclusion on the scope of our digital asset offering,” it said.

Regulators around the world have been grappling with how to properly regulate bitcoin, cryptocurrencies, initial coin offerings (ICOs) and cryptocurrency exchanges. Last year the SEC warned that some of the coins issued in ICOs could be considered securities, meaning trading them would have to comply with federal securities laws.

Goldman Sachs’ move comes after the bitcoin and wider cryptocurrency token price has been well supported by news this year that institutional money was about to get into crypto — and many will now be questioning whether that money is really on its way.

Earlier this year the new chief executive of Goldman Sachs David Solomon signaled the bank is looking into adding further bitcoin and cryptocurrency services to its portfolio. In an interview with Bloomberg Solomon said the bank must “evolve its business and adapt to the environment.”

Bitcoin bulls are also trying to hang on until early November, when the New York Stock Exchange’s parent company, Intercontinental Exchange (ICE), plans to roll out a bitcoin ETF  as part of its cryptocurrency platform Bakkt and in partnership with coffee chain Starbucks, software giant Microsoft, and Boston Consulting Group.

Yesterday, CEO of crypto payment startup Abra told CNBC the reason the SEC has insofar denied crypto ETF is because the crypto industry does not fit the applicant archetype.

Bill Barhydt suggested that the SEC has rejected crypto ETF applications because “people who are doing the applications don’t fit the mold of who the SEC is used to approving.”

It’s been suggested that the introduction of a registration process for popular instant bitcoin exchange ShapeShift may have spooked some users and “added fuel” to the sell-off.

Bitcoin climbed to an eye-watering near $20,000 late last year but has been heavily sold off throughout 2018, dropping to year-to-date lows of around $5,800 and sparking a wider sell-off of the wider cryptocurrency market.

Elsewhere, other major cryptocurrencies including Ethereum’s ether, ripple, bitcoin cash, and EOS were also hard hit this morning — all falling at least 10%.

The fortunes of most cryptocurrencies have been closely tied to bitcoin this year. Ethereum’s sell-off has been largely attributed to the huge number of ICOs that went live on Ethereum’s blockchain last year, with many of those investors bailing out throughout 2018.

Other major cryptocurrencies also fell sharply, dragged down by bitcoin.